How to use OpenType Features 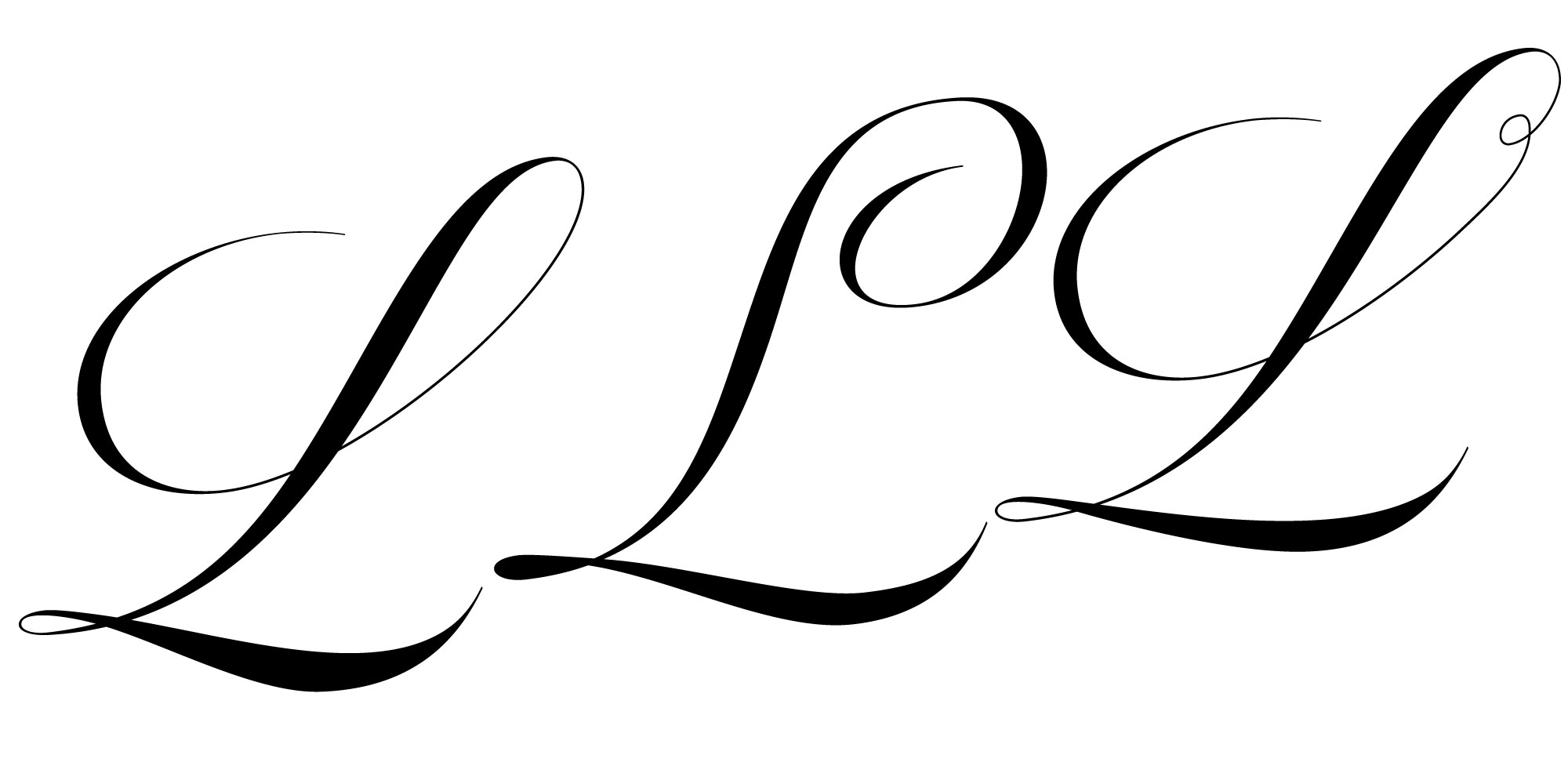 Using a font family with unique details is the base to develop a strong brand Identity. Most big brands choose the smartest option, creating a custom typeface. As this option is not accessible for everyone, Opentype features can help to customize typographic text and get that special touch to highlight the brand’s values or even create custom letterings. However, OpenType features purposes can go from solving typographic problems to just ornamental or decorative reasons.

Not all the fonts with opentype features are filled with special and alternative glyphs, so the best way to know the extra characters included is checking the glyphs map. Other options could be checking the specimen or visual graphics of the font. Initial forms, alternate letterforms, terminals and swashes are some of the special characters included. 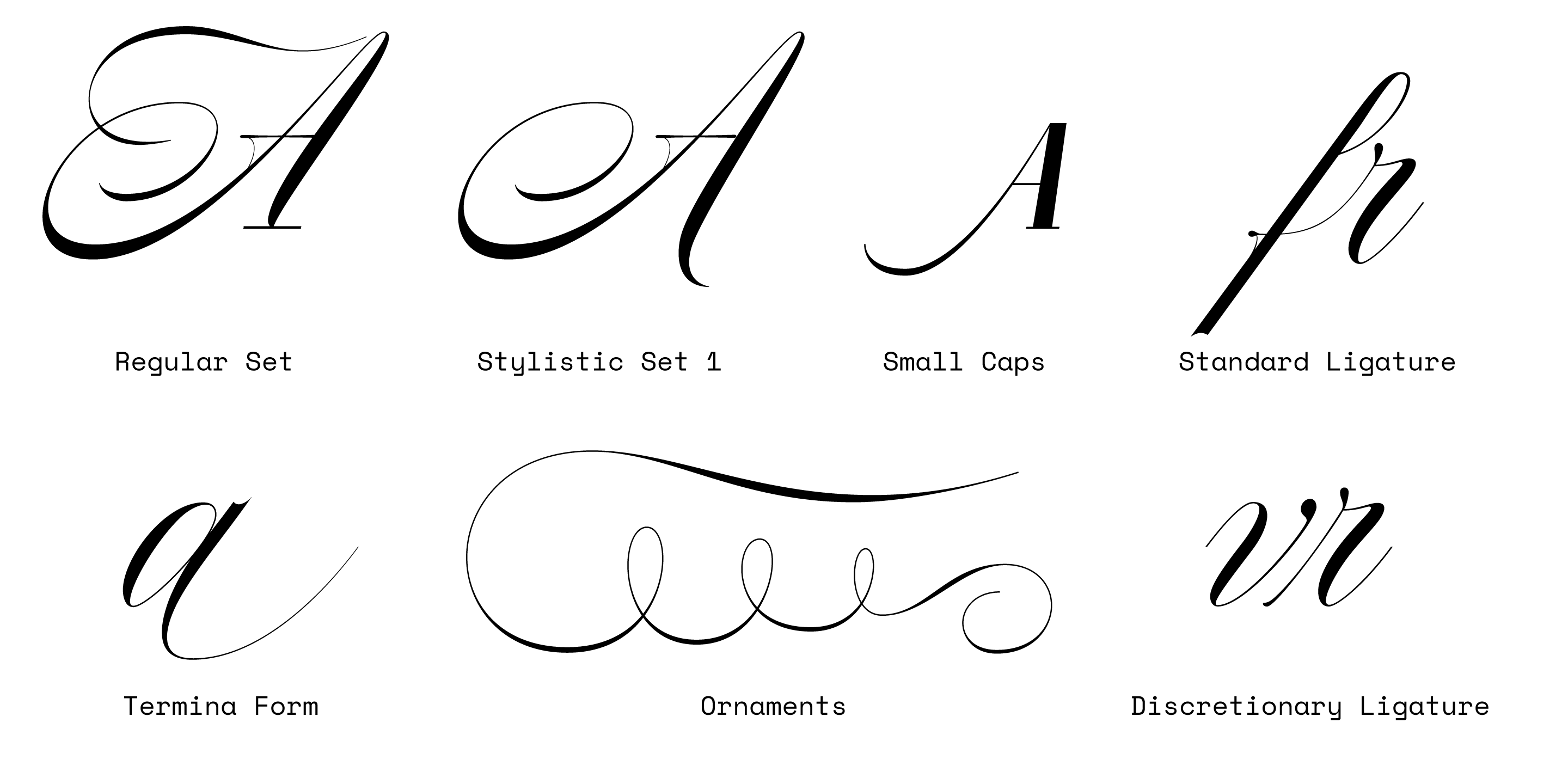 Which applications allow the use of OpenType Features?

In this both cases you will be able to access to Opentype features but with limited options, so we recommend to use applications like Adobe.

For Photoshop go to Window → Glyphs.

Illustrator and InDesign: Access to special characters like stylistic alternates and ligatures by opening the Glyphs panel (Window → Type → Glyphs). A faster way to open Glyphs panel, is to type "glyphs" on the Help menu. 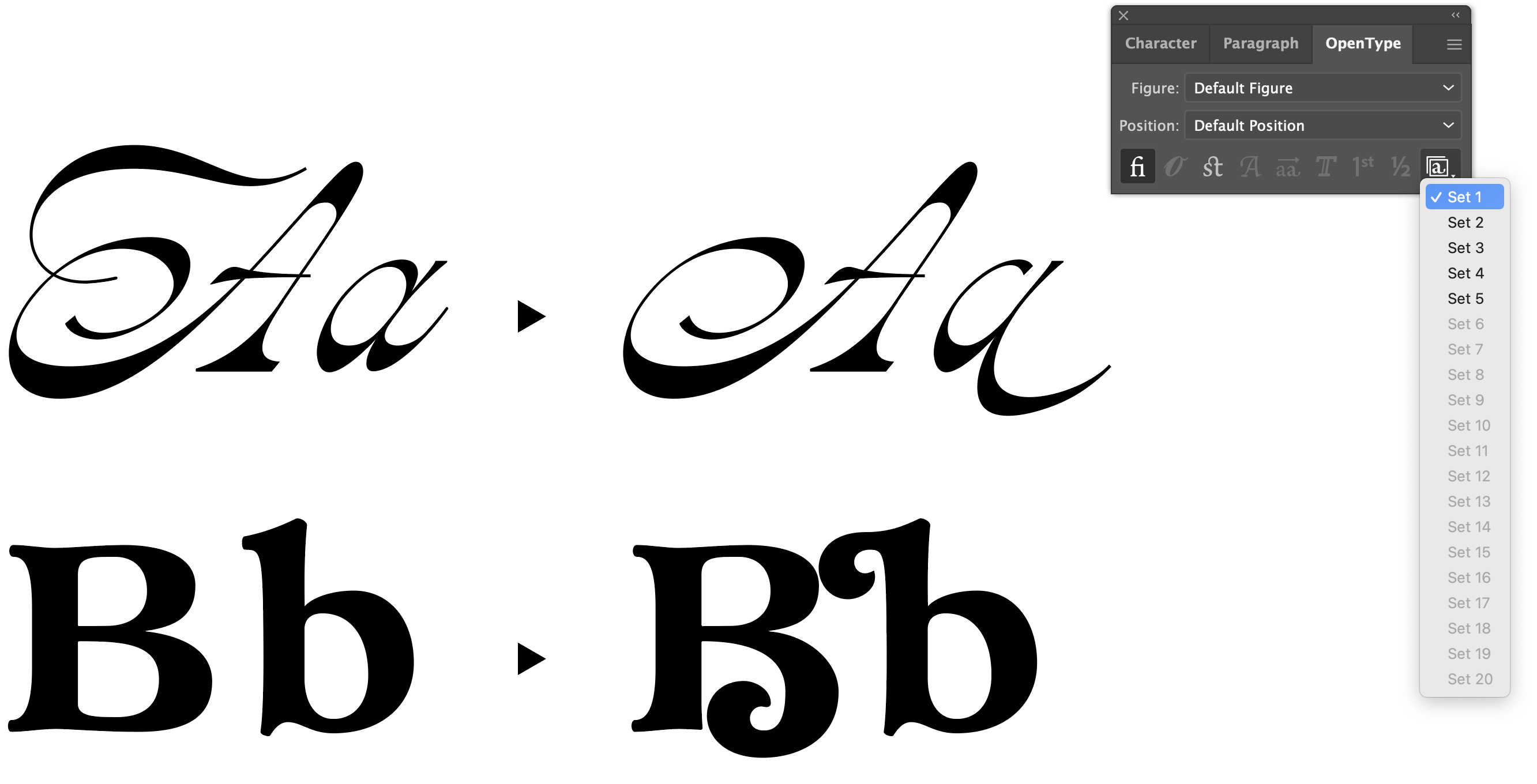 All you need to know about of OpenType Features

Some OpenType fonts come with lots of unique characters that can add character to your branding and design projects so easy. There are many advanced features that designers can choose to include in their font families. Some of the most popular features include capitals, ligatures, swashes, alternates, stylistic sets, and ornaments. These features will be very helpful to customise your designs and branding.

One of the great Opentype features are stylistic Capitals, giving designers the opportunity to customize the text and add emphasis to the message. Other features for Capital letters are small caps, titling, and capital spacing. small capitals are lowercase characters typeset with glyphs that resemble uppercase letters (capitals) but reduced in height and weight, close to the surrounding lowercase letters or text figures titling capitals are a variant of uppercase designed specially to use for heading and titles. The stroke width is reduced for use at larger point sizes where the stroke weight used in smaller text sizes would be too heavy. Capital letters usually appear at the beginning of a word or sentence, so they're designed to fit correctly next to lowercase letters. But when using capital letters together, that spacing looks too tight. In this case Capital Spacing feature will add extra letterspacing giving more readability to the text.

Using Ligatures you will get two or more glyphs combined in just one, enhancing readability or making the text visually more attractive. A standard ligature is functional in nature, and is created to solve the problem of characters that clash when set next to each other. Contextual ligatures help to give a slightly more animated and informal appearance and to lend more visual interest to a type composition. Discretionary ligatures are decorative in nature and should be used at your discretion, as the name indicates. Some discretionary ligatures combine frequently occurring letter pairs (like “Th”) into a single graceful design. Historical Ligatures were in common use in the past, but appear anachronistic today. Some fonts include the historical forms as alternates.

Ligatures included in Norman and Nautica.

Swashes are typographical flourishes that add flair and extend a character. Designed for ornamental purposes, such as an exaggerated serif, initial and terminal, tail, entry stroke, etc. providing a decorative character. 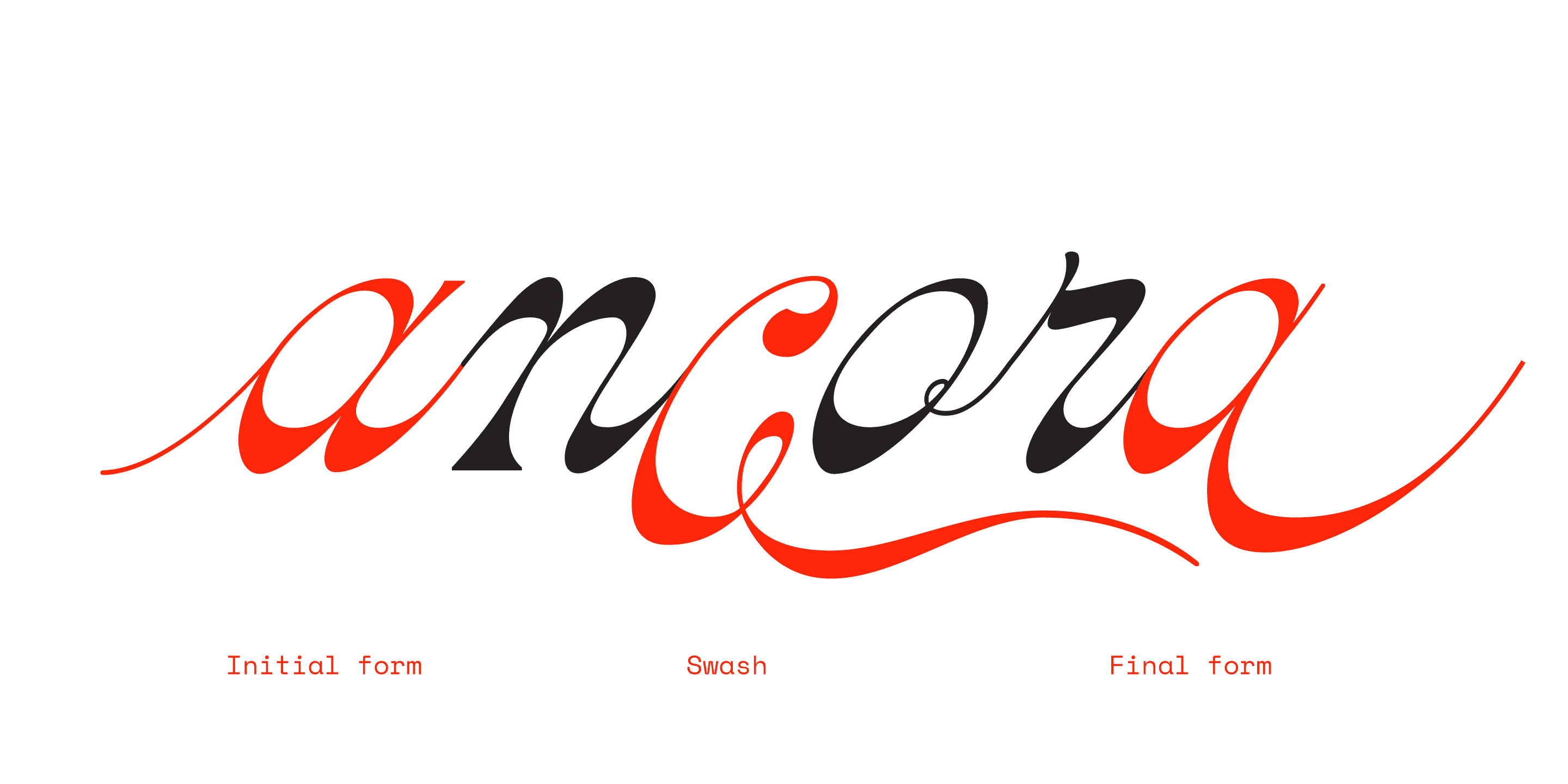 These characters are designed as options for customizing the look and add a visually interesting approach of both text and display settings. They are variations of the standard default characters in a typeface and usually available for uppercase, lowercase, and figures, as well as for other characters such as ampersands and punctuation.

Some fonts can organize alternate glyphs into Stylistic Sets. Choosing one of these sets, alternates automatically apply to a range of text, allowing to get an immediate variation of the letterset.

Accessible through OpenType features we can also find sets of graphics or icons that harmonize with the visual style of the type where they are included. These glyphs are specially useful to add visual cohesion to the layout, using letters and graphic elements designed to shine when they operate together.